The Ústí region lies in the north-west of the Czech Republic along the German border with the capital city of Ústí nad Labem. It has a rich history which resulted in significant cultural heritage, mostly of immovable type, e.g. castles preserved since the 10th century, a network of former royal cities with medieval architecture (Žatec, Kadaň, Louny, Most, Ústí nad Labem, Litoměřice), Gothic and Baroque churches, monasteries, but also industrial heritage linked to the traditional mining and chemistry industry, hops planting and processing etc. This cultural heritage suffered of severe damage during the World War II. After the war, German population in the region was expelled, and that brought devastating discontinuity in the attitudes towards regional cultural heritage. During the communist era massive surface coal mining changed the landscape and caused damage to numerous cultural properties both in the countryside and in the cities (e.g. almost complete demolishing of the medieval center of the Most city). After the fall of the communist regime the decline of coal mining and regeneration of devastated landscape started. Efforts to systematically renew the cultural heritage need skilled workforce in different domains and advanced expertise in history, architecture, etc.

History Department at the Faculty of Arts has addressed these regional needs already in 1990s. In 2005 they developed new bachelor´s study programme “Historical Monuments Documentation” which is unique in the Czech Republic. It links three lines of expertise in the curriculum. First part is focused on general and regional history and methods of history and archival research. Second part comprises of architecture and art history and courses on monuments’ preservation law, regulations and institutions. Third part consists of practical exercises in documentation, preservation and presentation of cultural heritage. Graduates of this programme are prepared for work at regional institutions of cultural heritage preservation such as regional branches of the National Heritage Institute, local or municipal museums, archives, city councils etc. Within this study programme the bachelor’s theses focus on specific historical monuments in the region, so the regional cultural property has been gradually and systematically mapped and documented. At the department the Documentation Laboratory was established first and in 2008 it was reorganized and adapted in cooperation with Geo laboratory of the Faculty of the Environment into the Cultural Heritage Documentation and Digitization Center. Its’ goal is to provide infrastructure and equipment for documentation not only for students and academics, but also for experts from the region. Due to successful development projects it is equipped with several high-tech 3D scanners, cameras and appliances for land survey mapping.

The Center supported not only research at the History Department in recent years, but also developed projects aimed specifically to document monuments and other cultural heritage sites around the Ústí region.

For instance the project “Documentation of Historical Buildings used for Processing Hops” should carry out basic documentation of unique large constructions that are not used for their original purpose today. These derelict objects are in private property and they are usually not on the list of state-protected historical monuments. Until 2018 they documented approx. 2000 buildings and published web pages showing them (https://npu.maps.arcgis.com/home/webmap/viewer.html?webmap=74a1b3df389e4aebb65fa2939cc300d9).

Furthermore two projects for documentation, digitization and presentation of endangered cultural heritage in the region of northwest Bohemia have been supported by the Czech Ministry of Culture. Students participate regularly in the projects as for example in case of Terra Sacra Incognita project whose aim was documentation and presentation of historical buildings in two small villages in the region. As a follow-up of this endeavor a new project was developed to restore a Baroque church in one of the villages by a local NGO focused on restoration of monuments in the Ústí region. The restoration was finished in 2016 thanks to a grant from EEA and Norway Grant Programme.

Activities of the History Department also help to promote regional cultural heritage via exhibitions not only in the city of Ústí, but in partnership with central institutions also in Prague as in case of large and successful exhibition „Without Borders. Art in the Ore Mountains between the Gothic and the Renaissance“ in the National Gallery in Prague presenting ancient art from the Ústí region to wider public and international audience. 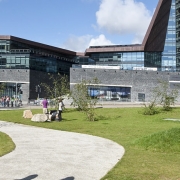 Tailored Training and Research: The National Institute for Cultural Research and Training – Romania

National qualifications and occupations portalResponsibilities of an Academic Head of Programme for Work-Based Learning in...
Scroll to top